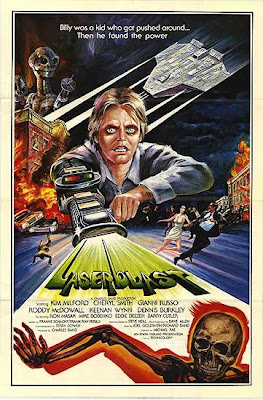 An MST3K favourite, Laserblast is one of many Star Wars influenced films that poured into theatres and drive-ins across the world.

The trailer focuses on the crude stop-motion aliens and Billy blowing things up real good. The scenes of Billy in his monster/zombie makeup are actually somewhat creepy. He kind of looks like a mix of Luke Skywalker and the Emperor.

Somehow Roddy McDowall was convinced to take a paycheque to be in this film.