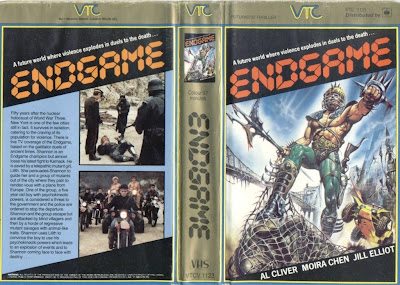 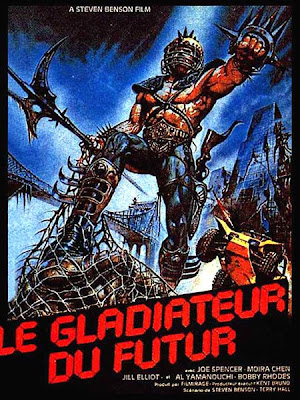 More Mad Max inspired madness from Italy. The wildly prolific D'Amato (Antropophagus, Buio Omega) helmed this one and he brought back favourite George Eastman and Lucio Fulci regular Al Cliver (Zombie, The Beyond, The Black Cat).

This is not the best example of the genre - nods would go out to Enzo G. Castellari's "1990: Bronx Warriors" and Sergio Martino's "2019: After The Fall Of New York", but it's a great little diversion and at least on par with Fulci's similar "The New Gladiators".

I can think of at least 5 Italian post-apocalyptic films that are better than Endgame, but the genre is so inherently entertaining and crazy that even the mediocre ones are worth seeing. All you need to see on the screen are a good rock quarry location, eyepatches, steel-plated shinpads, fingerless gloves, George Eastman and plenty of mannequins thrown under cars. Endgame has all of this and the eternally depressing Al Cliver in a rare leading role. Average for the genre but the pre-Running Man scenario is fun and the dubbing is typically hilarious, especially for Eastman's character.
Posted by Jeremy Milks at 5:48 PM