Zombie vs. Ninja (1987) aka Zombie Rival: The Super Ninja Master 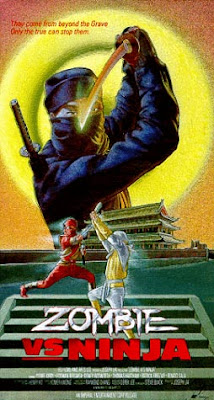 Admittedly my knowledge of 80's ninja titles is pretty low but this one caught my eye for the title alone (actually this one has many titles and it took me awhile to confirm that this trailer was for Zombie vs Ninja).

Joseph Lai was the producer on this and he was responsible for about 9 or 10 similar films PER YEAR in the mid-80's. He also directed a handful of them and about 90 percent have the word "Ninja" in the title. Many of these titles were released in North America by the video company Imperial Entertainment and the VHS covers are really memorable (many of which can be seen on Critical Condition Online). Lai went on to produce a whole slew of "Kickboxer" movies in the 90's.

Like a lot of these films, it looks like they were almost entirely shot on one location in the woods and there is plenty of dubbed in phrases like "bastards!" and the like. Fun stuff.