Absurd (1981) aka Antropophagus 2 aka Monster Hunter 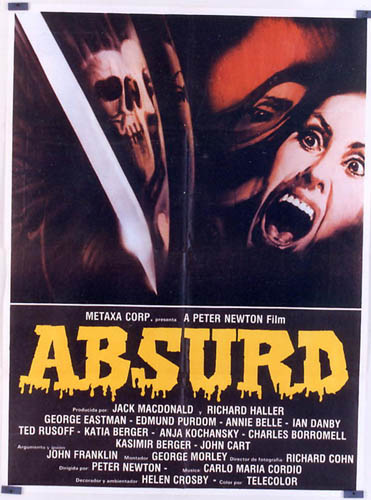 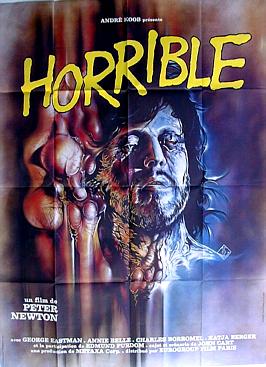 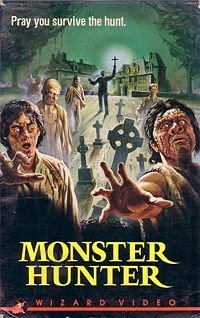 Veteran Italian director D'Amato directed this, although in the English speaking prints he went under the pseudonym Peter Newton, which was a common practice back then. American distributors were wary that their drive-in audiences wouldn't give European films a chance so many Italian and Spanish names were Anglicized along the way (D'Amato probably used more pseudonyms over the years than any other director in history!)

This is D'Amato's follow up to his notorious Antropophagus from 1980 (D'Amato was credited with directing 9 films in 1980 alone!) and it is as much of a gorefest as the first one.

George Eastman (Rabid Dogs, 1990: Bronx Warriors, Baba Yaga) returns from the first film to play the psycho and he hacks and chops his way through this grindfest. He also wrote the screenplay. Edmund Purdom (Pieces, The Fifth Cord), who just passed away on New Years Day of this year, plays a small role as well.

Not surprisingly, this was on the list of banned films in the UK during the 80's making it a so-called "Video Nasty".

This film has not officially been released on DVD yet so good luck finding it without spending some bucks for the Monster Hunter on Wizard Video edition on Ebay for the VHS.
Posted by Jeremy Milks at 5:19 PM

I seen this movie as a kid and loved it! The killing scenes were great, especially when he shoved her head into the oven and cooked it a nice charcoaly black. Looking at it now it's trange to see how bad the colours in the old movies were but still a classic horror