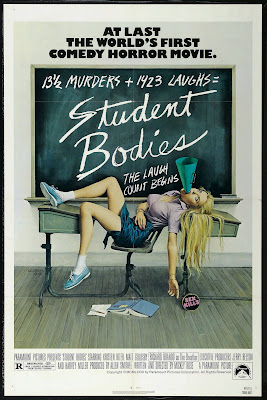 Probably the first outright horror parody, pre-dating stuff like Scream and Scary Movie by a decade and a half.

By the trailer, you can see that this was inspired by the previous years "Airplane". Mickey Rose, who wrote and directed, was once part of Woody Allen's team and co-wrote many of the early screwball comedies of Allen's career.

The parallels to today are striking. We are now seeing a slasher renaissance in Hollywood and soon enough we will be seeing the parody films in their wake. Student Bodies was released in reaction to the major success of films like Halloween and Friday The 13th from the first slasher wave.

The next Scary Movie is probably already on it's way.

This movie also features a scene that is strikingly similar to the opening of the first Scream film. It's probably no coincidence.
Posted by Jeremy Milks at 4:59 PM