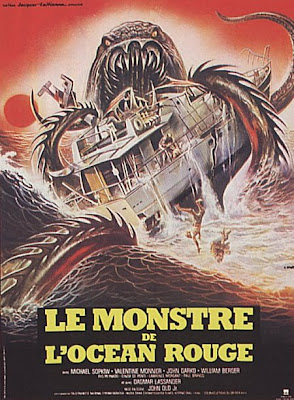 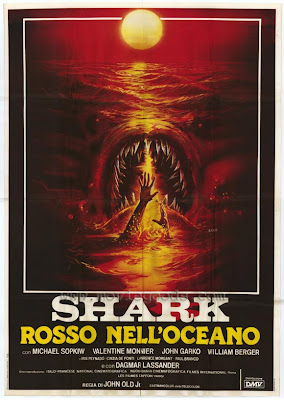 One of a few legendary Jaws-rip offs from the Italians. Movies such as Enzo G. Castellari's "The Last Shark" and Bruno Mattei's "Cruel Jaws" were so slavish to the original that they actually used footage directly ripped from the blockbuster Spielberg film (and were sued because of it).

This one tries to be more coherent but it ends up being less entertaining because of it. This is a true stink bomb from the wildly uneven Lamberto Bava who was sometimes capable of great films like "Macabre" (1980) and "Demons" (1985).

This is also one of Michael Sopkiw's last films, though he has only done 5 in his whole career. Still, he's a memorable leading man, especially in Italian jungle fare like "Massacre In Dinosaur Valley" (1985) and as a Mad Max-like warrior in "2019: After The Fall Of New York" (1983).
Posted by Jeremy Milks at 9:35 PM

That's crap! No film lifted actual Jaws footage. Castellari was threatened with a lawsuit if ever L'Ultimo Squalo was released in the same territory as Jaws, because it was plagiaristic towards Jaws & Jaws II, but it did not use any of Spielberg's shots. Because of the threat, all copies of this film available today come either from the Greek VHS, Japanese laser disc, or Malaysian VCD. Castellari's film is excellent and has far more flair than the kind of copy and paste idiot hacks, who get paid to wind into films without ever seeing them, give it credit for!

So I'm not sure why you're so upset.