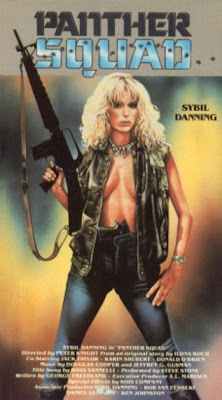 (Note: Since posting this the actual trailer has become unavailable. This short clip will have to do instead.) This trailer has it all - Sybil Danning dispensing clips like Arnie and kicking the living shit out of stuntmen, an all-girl combat squad armed with machine guns shooting at helicopters and a crazed South American dictator vowing to take over the world. Oh yah, there's lasers and a motorcycle chase.

It also sports one of the funniest lines I've ever heard in a film - "Surrender or I'll blow your Nike's off!"

If you don't know who Sybil Danning is, then I suggest you track down some of her easier to find movies (you'd be hard pressed to even find a VHS copy of Panther Squad though there are a few kicking around Ebay) like Chained Heat (1983), Reform School Girls (1986), The Howling II: Your Sister Is A Werewolf (1985), The Red Queen Kills 7 Times (1972) and Battle Beyond The Stars (1980).

Those are some pretty wild films and Danning was great in all of them (especially as the werewolf queen Stirba in the absolutely ridiculous Howling II which also starred a slumming Christopher Lee).

Danning also recently played a nurse in Rob Zombie's disappointing Halloween remake as well as the main part in Zombie's faux-trailer "Werewolf Women of the SS" in Tarantino and Rodriguez's "Grindhouse".
Posted by Jeremy Milks at 10:19 PM

Wow. I expect to see this trailer in many places soon, and a scramble to find the film. It looks like definitive Eighties garbage the way people like it.

One of my favorites, this film is so incomprehensible as to be transcendental I love it so much I made a t-shirt of the cover. I'll link to this on Lost Video Archive ASAP

You can get Panther Squad on dvd-r at ioffer.com from a seller named videodust84..