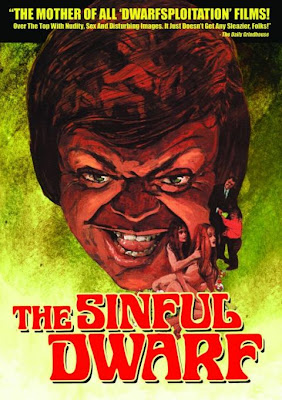 This is a legendary movie that not many have seen until the recent DVD release by Severin Films which bills it as the "Mother Of All Dwarfsploitation Movies".

It was filmed in Denmark and stars one of that country's most famous dwarf actors, Torben Bille who was the host of a children's show at the time.

Long considered to be one of the sleaziest films ever made, it involves a deranged dwarf living with his mother who lures women to his house to do some awfully bad things to them.

I haven't had the opportunity to watch this one yet so I can't comment on the quality. But the reputation of this movie speaks for itself. The website DVD Resurrections calls it "exploitation so audacious it must be seen to be believed".

This is not really the type of movie I enjoy but the trailer is so demented that it has a welcome home here.
Posted by Jeremy Milks at 10:16 PM

I think you'll enjoy this flick. I did.