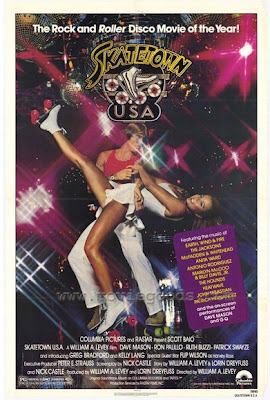 Directed by William A. Levy.

"Famous" mostly for being Patrick Swayze's film debut, Skatetown U.S.A. fits the term "exploitation" perfectly, as it was created solely as a way to cash in on the roller disco craze with a paint-by-the-numbers script to make it widely accessible. Another film that did the same thing was Roller Boogie starring the one and only queen of exploitation, Linda Blair.

It's the Saturday Night Fever formula. Take a popular culture trend and insert a young man (or woman) defying all the odds to conquer the form and get the girl at the end.

That's what "exploitation" is all about.
Posted by Jeremy Milks at 12:28 PM

This is a very hard to get film. Anjd that trailer alwaysh had give it in my point. Wherte did you get it?

I´m saving money to buy ROLLER BOOGIE actually. I love the trailer of that film!

"The greatest story ever rolled," indeed. Something was rolled, I'm sure.