Beyond The Door (1974) aka The Devil Within Her 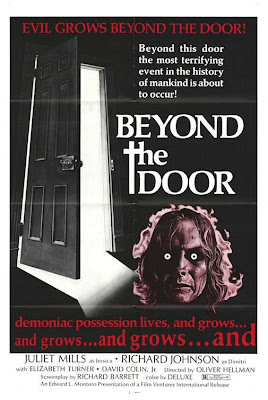 A Euro-Trash classic and, along with the blaxploitation film "Abby", one of the most unapologetic rip-offs of the mega-succesful "The Exorcist". This has Gabriele Lavia who was also in other great Italian horror films like Deep Red, Inferno and Zeder.

In my opinion, the head-turning scene in this film (as seen in the trailer) is creepier than the one in the Exorcist.

This film made a lot of money in America and it's success made the distributors of Mario Bava's unrelated film "Schock" to release it as "Beyond The Door 2" in North America.