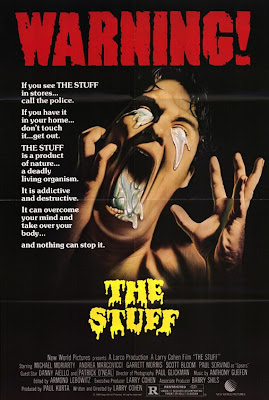 A product of its time, the 80's, when mass advertising and the tide of junk food began to take over. This is a truly fun and subversive dig at the plastic Reagan 80's by Larry Cohen, who was also responsible for a similarly themed It's Alive in 1974 (although the Stuff turns out to be an all-natural substance from the core of the earth!!).

One of the first "consumer culture gone wrong" horror films (besides the original Dawn of the Dead), The Stuff pays homage to classic films like The Blob and Invasion Of The Body Snatchers while still packing in all sorts of 80's strangeness that makes this a nice piece of memorabilia.

Among my group of friends when I was a young kid, this movie was a video store favourite because it was harmless enough that the parents didn't really care and gross enough to get us our kicks.