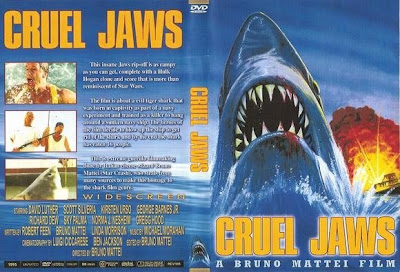 So this is a second-generation rip-off I guess. It was actually marketed as "Jaws 5" in some regions. Genius.

Mattei was responsible for other great Italian schlock like "Hell of the Living Dead", "Violence In A Women's Prison" and the unheralded dystopia film "Rats".

There are many great moments in this trailer, such as when the little girl in the wheelchair is accidentally dumped into the water and the various re-enactments of scenes from Jaws like the little dog who is the Italian version of "Pippet".

Try and figure out how much footage is actually from Jaws (there is a lot).
Posted by Jeremy Milks at 9:50 AM

Excellent blog, enjoyed the trailers a lot! You should try and get hold of 'Revenge of the Ninja", another genius Cannon Films production.