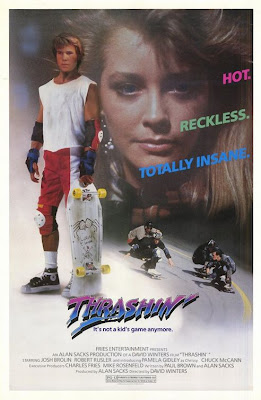 A classic from my youth and for awhile, the only skateboard movie worth watching (and probably still is). The trailer focuses a lot on the corny romance sub-plot but there are so many great lines and moments in this film that the trailer doesn't really even come close to giving you the glimpse you need.

The trailer does have the awkward and hilarious quote that paraphrases the famous Brando line in "The Wild One" but my favourite will always be the stoner dude coming out of the house and saying "Oh look, it's the Ramp Locals!" in that 80's Cali-skater accent. Priceless.

I once knew a guy in Montreal who had been in a band called Cory Webster, named after the Josh Brolin character.
Posted by Jeremy Milks at 5:56 PM

i didn't even realize it existed until I watched this. I still don't know how i missed this being obsessed with such classics as Gleaming the Cube and Rad. Gonna have to track it down.

Thrashin' is a pretty amazing movie. I can't ever get anyone to watch it with me.

I put you on my blogroll at www.grindhouseland.com