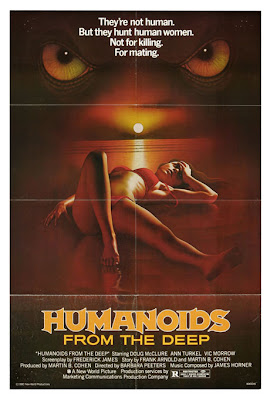 Another bizzare entry from the extensive Roger Corman-produced catalogue that revolves around pollution created fish-men rising from the water to mate with human women!

Barbara Peters, who directed another Cult Trailers favourite "Bury Me An Angel", was fired from this movie by Corman after she refused to shoot additional footage of the monsters attacking some young women in an effort to get more nudity in the film.

Vic Morrow would go on to star in two movies by one of my personal favourite directors, Enzo G. Castellari, in "The Last Shark" and "1990: Bronx Warriors" over the next two years before being killed in an accident on the set of the "Twilight Zone" film during a segment being directed by John Landis.
Posted by Jeremy Milks at 3:40 PM