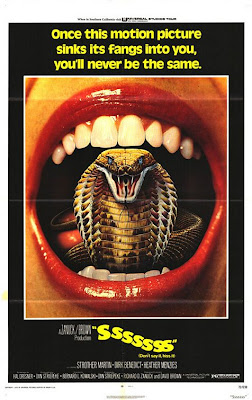 Brought to you by the Universal producing team of Zanuck and Brown, the two who would bring us Jaws just two summers later.

Sssss is a bit of a warm-up for that movie which would take drive-in B-movie fare mainstream and make millions of dollars with it.

This trailer has some great voice-over work with lines like "Don't say it, hiss it!" and "Touch your skin. It's scaled. Look for your legs. They're gone. Feel your body. It's cold."

Or how about this classic, "King Cobra versus Mongoose! Or is it man against man?"